This is a world famous short story by Leo Tolstoy, celebrated Russian author. The story was first published in 1885. This was part of a collection entitled ‘What Men Live By and Other Tales’.

There was a king who developed an idea that he would never fail if he knew the answers to three questions. These questions were:

What is the best time to do something?

Who is the most important person to work with?

What is the most important thing to do at a particular time?

Many learned people attempted to answer the king's questions, but they all came up with different answers. The king decided that he would consult this subject with a wise hermit who lived in a nearby village. Knowing that the hermit would only talk to common people, the king disguised himself as a peasant and proceeded to meet the hermit. He had left his guards behind and went to the hermit just by himself.

The hermit was digging flower beds when the king arrived. The king told the hermit about the three questions he had in mind, but the hermit kept on digging rather laboriously. The king offered to dig for him for a while. After digging for some time, the king again asked his three questions. Before the hermit could answer, a man emerged from the woods. He was bleeding from a terrible stomach wound. The king took good care of him, and they stayed the night in the hermit's hut.

The next day the wounded man was doing better, however, he appeared to be skeptical even after all the help he had received. After a while the man confessed that he knew who the king was, and told them that the king had executed his brother and seized his property. He had come to kill the king, but the guards wounded him in the stomach. The man had now changed his mind and pledged allegiance to the king. He then left the place.

The most important time is now. The present is the only time when we have power.

The most important person is whoever we are with.

The most important thing is to do good to the person we are with.

7colours: What I learned from the UniverseCity of life

Initially 7colours was a website. At a later stage, the content was converted to an e-book and published through Amazon Kindle. This e-book contains a number of articles on 4 categories:

Home school is the first and most important school. This is what I have learned in my UniverseCity of Life. Parents need to be careful about creating and continuously modifying this school, as their children will learn and be heavily influenced from here. The home environment is the most important thing to be created and maintained. The rules and regulations must be well defined and clarified to children. The concept of discipline must be properly explained to children at an early age.

HOW DEEP IS YOUR LOVE?

My UniverseCity of life has taught me many unbelievable lessons, not to be found in textbooks, magazines or even the vast internet.  Therefore, when I see a couple deeply in love, I ask this question in my own mind, as if I am asking asking them, "HOW DEEP IS YOUR LOVE"? It really is a mystery.... In most situations, the tangible result out of love is relationship. The world is really a practical place, therefore practical lovers translate a relationship to a partnership (again, in most situations). These lovers are usually successful, as they understand the practical side of life and sincerely care for each other. Love is deep, very deep, unbelievably deep as long as both lovers can balance their self interest in a manner that can maintain a win.win situation. Love starts to crack as soon as something happens that hurts/ offends a lover. The common reasons/ events/ occurences are:

* MONEY (Are both individuals equally happy?)

* POWER (Who should be the leader in family affairs?)

A relationship will succeed if there are 2 words present - 'CARING' and 'SHARING'. This is some something I heard from someone sometime in the past..... can't remember who it was ...

I have been thinking about the word 'discipline'. I like this word. This is one of my favorite words. I have always felt this is one of the most important words, if not 'the most'. Talking about the most important word, the name of Tom Hopkins comes to mind. When I was just 22 years old, I read his book 'The Official Guide to Success' and I WAS IMPRESSED just for one sentence. The sentence was "The most important word in the English dictionary is balance". While reading that book I loved it which made me think about the word 'balance' until I found out why it was identified as the most important English word. I had read that book at least 20 times and thought about that sentence numerous times until now. And after so many years, today we are all talking about the importance of 'work-life balance'. Tom Hopkins had discovered the importance of the word balance way back in the 80s. That's simply the reason why he had become a millionaire at only age 27 or so. A million dollars at that time is equal to at least 5 million dollars at today's value!

Now I have noticed (in my little UniverseCity of life) that although we have all heard about the word discipline over and over again, most people don't really understand the true meaning of this word, although it is so simple in reality.

What then is the meaning of discipline?

careerdesign.biz is a participant in the Amazon.com Services LLC Associates Program, an affiliate advertising program designed to promote a means for sites to earn advertising fees by advertising and linking to amazon.com.

Additionally, careerdesign.biz participates in various other affiliate programs and we sometimes get a commission through purchases made through our links. 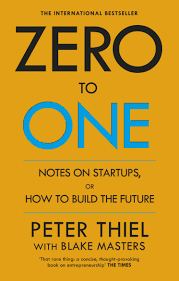 Selected key messages (not all inclusive)

"NOTES ON STARTUPS OR HOW TO BUILD THE FUTURE"

"EVERY MOMENT IN BUSINESS happens only once. The next Bill Gates will not build an operating system. The next Larry Page or Sergey Brin won't make a search engine. And the next Mark Zuckerberg won't create a social network. If you are copying these guys, you aren't learning from them.

" "Every time we create something new, we go from 0 to 1. The act of creation is singular, as is the moment of creation, and the result is something fresh and strange".

This is an excellent book on entrepreneurship. It explains the nature of startups in details.  A startup will not be successful if only the technical side is emphasized but the business development aspect is overlooked or ignored. This book also highlights the importance of marketing and sales. Carefully consider the following paragraph -

"In Silicon Valley, nerds are skeptical of advertising, marketing and sales because they seem superficial and irrational. But advertising matters because it works. It works on nerds and it works on you. You may think that you are an exception; that your preferences are authentic, that advertising only works on other people. It's easy to resist the most obvious of sales pitches, so we entertain a false confidence in our own independence of mind. But advertising doesn't exist to make you buy a product right away; it exists to embed subtle impressions that will drive sales later. Anyone who can't acknowledge its likely effect on himself is doubly deceived."

The authors have explained the difference between nerds and salespeople in a very interesting way. As an entrepreneur and career consultant, I enjoyed reading the following paragraph over and over again and rediscovered the two exactly different types of work:

"Nerds are used to transparency. They add value by becoming expert at a technical skill like computer programming. In engineering disciplines, a solution works or it fails. You can evaluate someone else's work with relative ease, as surface appearances don't matter much. Sales is the opposite: an orchestrated campaign to change surface appearances without changing the underlying reality. This strikes engineers as trivial if not fundamentally dishonest. They know their own jobs are hard, so when they look at salespeople laughing on the phone with a customer or going to two-hour lunches, they suspect that no real work is being done. If anything, people overestimate the relative difficulty of science and engineering, because the challenges of those fields are obvious. What nerds miss is that it takes hard work to make sales look easy."

There are many other interesting sentences and paragraphs in this book, I have only shared a very small part of it. If you are focusing on a startup, you will find this book very useful.